2022 will be a hard year for the global automotive industry, which must now face the economic consequences of invasion of Ukraine as well as Brexit turmoil, the Covid-19 pandemic, and an ongoing semiconductor chip shortage. The Czech and Slovakian economies, which are highly dependent on the automotive sector, are in for a particularly tough ride.

The Czech Republic and Slovakia have a long history of leadership in the automotive industry. The two countries are the 15th and 19th largest vehicle producers in the world, respectively, and account for a significant portion of the auto manufacturing industry in Europe alongside Germany, Spain, and France. 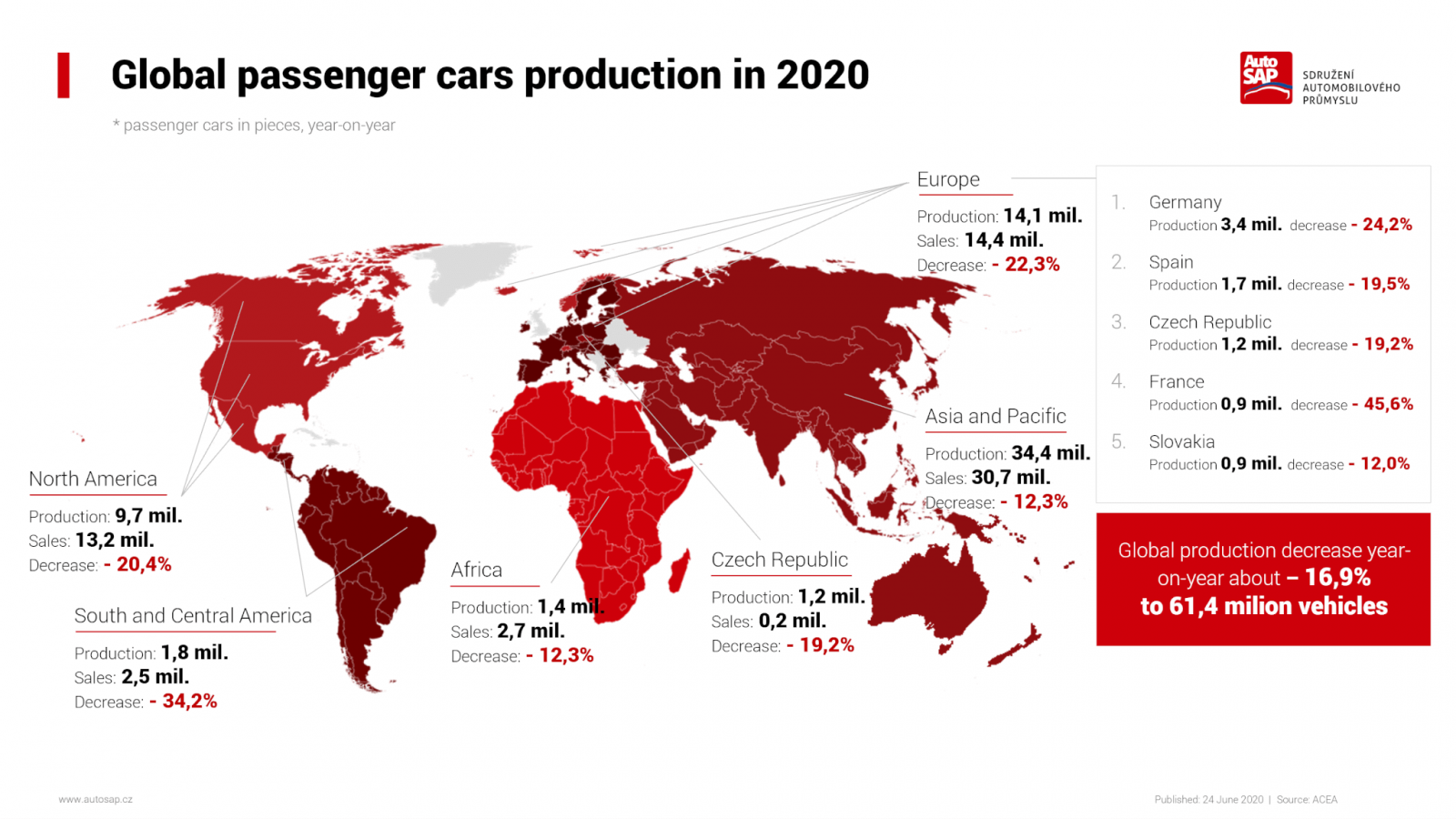 The Czech automotive sector is highly internationalized. More than 90% of Czech carmakers are foreign-owned and more than half of the world’s 50 top vehicle suppliers have facilities in the country. The main car manufacturers in the Czech Republic are Skoda Auto/Volkswagen, PSA Peugeot Citroen/Toyota Motor Corporation, and Hyundai.

Cars and spare parts make up a massive 20% of Czech exports. The Czech automotive industry accounts for more than 20% of all locally produced goods, directly employs more than 120,000 people, and at full capacity produces more than 1.3 million passenger cars per year. That’s a new car every 23 seconds! Overall, 35% of the Czech economy depends on the industry.

In Slovakia, the automotive industry plays an even greater role in the domestic economy. It accounts for 30% of the Slovakia’s total exports and employs over 177,000 people. In recent years, this country of about 5.5 million has produced more passenger cars than either Italy or Great Britain, whose populations each exceed 60 million. The main car manufacturers in Slovakia are Volkswagen Slovakia in Bratislava, KIA in Žilina, PSA Peugeot Citroën in Trnava, and Jaguar Land Rover Slovakia in in Nitra.

Since 2020, the global automotive industry has faced unprecedented challenges due to Brexit, the global Covid crisis, and an ongoing semiconductor chip shortage. This year brings new challenges. According to the Czech Automotive Industry Association (AutoSAP), in January 2022 Czech passenger car production fell by 11.4% year-on-year to 92,657 vehicles, the lowest output for that month since 2010.

The industry’s challenges have also been compounded by reduced foreign sales due to invasion of Ukraine. Skoda Auto, the Czech Republic’s biggest car manufacturer and part of The Volkswagen Group, declared that it will pull out of the Russian market shortly after the hostilities began. According to Autovista24 magazine, manufacturing at Skoda's Ukrainian factory that produces the Fabia, Superb, Karoq and Kodiaq models has been suspended.

As reported by The Wall Street Journal, Volkswagen has suspended operations at two of its Russian factories and halted the export of Volkswagen, Audi, Skoda, Porsche and Bentley products to this country (statement on the Volkswagen Group's business activities in Russia: https://www.skoda-storyboard.com/en/press-releases/statement-on-the-volkswagen-groups-business-activities-in-russia/)

According to Reuters, other global vehicle manufacturers have taken similar measures. The Mercedes-Benz Group plans to spin-off its stake in Russian Kamaz, while GM and other luxury car makers like Jaguar are halting exports to Russia. Ford, Renault, BMW and AB Volvo are suspending some production in the country.

“Russia was previously one of the most important markets for many carmakers, so withdrawing from it will have heavy financial consequences,” comments Tatsiana Serykava, Branch Manager at AsstrA Prague. “The invasion of Ukraine and sanctions against Russia has significantly affected the European economy. Firstly, in terms of delivery disruptions, and fuel and electricity prices have risen everywhere in Europe. The global automotive industry is facing huge changes. The invasion is having a wide-ranging impact on the entire industry, which had already been experiencing significant pressure over the past few years due to Brexit, the Covid-19 crisis, chip shortages, and political pressures to shift towards green energy. The Czech Republic and Slovakia, whose economies are highly dependent on the sector, are in for a particularly tough ride.”