Creativity is the standout asset of the 21st century. The ability to combine, synthesize, and regroup existing resources to create new options is becoming indispensable when solving daily challenges. Curious and courageous people are prized in every industry because they experiment without fear of failure. And so we are delighted to introduce creative individuals at AsstrA who share their creative approaches with their colleagues.

As a creative person who manages to combine the logistics world and an art gallery, Elena Lagun manages AsstrA’s administrative office in Zurich.

Even in early childhood she used improvised crayons and watercolors not only to reproduce her own fantasies on paper but also to accurately copy the paintings of great artists. As a young fan of fairy tales, she found the works of famous Russian artist Vasnetsov especially inspiring. This talent brought her to an art-focused high school.

When discussing her future, her parents took a clear position: being an artist was not a job. At the time there were not enough arguments to challenge this belief. After graduating from the Belarusian State Economic University in Minsk with a degree in Finance and Credit, at the insistence of her friends she exhibited several paintings in the prestigious Mastatskay Gallery in Minsk. Art critics and the gallery’s director commended her work, but she had neither a formal art education not membership in the Belarusian Union of Artists. Thus at the time she did not have the right to participate in art exhibitions or sell works through galleries. At this point, her attempts to become a "real" artist ended.

However, her ability to draw and a constant creative urges came in handy when starting her own business. After graduating from the International School of Design in Moscow, she founded her own interior design firm. In 2002 she became an independent designer at the Lithuanian carpet factory in Kilimai, which produces custom-made designer carpets. At that time she painted pictures for herself and as gifts to friends and business partners.

After moving to Switzerland in 2004, on the basis of her artistic portfolio she was admitted to the Swiss Union of Artists. This allowed her, as a formally recognized artist, to participate in major international exhibitions, be nominated, and receive certificates and prizes. In addition, she managed to open an atelier-gallery in the center of Zurich which displayed the works of talented Belarusian artists. 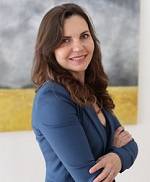 “I work in different styles, from hyperrealistic figurative art through impressionism to abstractionism. My main techniques range from classical oils and pastels to the little-known encaustic painting, an ancient technique involving hot wax. For specific exhibitions I create unique projects corresponding to the organizer’s vision and background.

Creativity is not only about painting, music, or art in general. Creative thinking is valuable in every profession and in every professional role – from secretaries to CEOs. Administering AsstrA’s head office constantly requires creative decision-making in unusual scenarios”, Elena Lagun says.

From 1 - 4 October 2020, AsstrA invites you to visit Elena Lagun at Stand 22 at Art International Zurich. Read more at www.elenalagun.com

Editor’s Blog: Is this the end of the Christmas peak as we know it?

Couriers under growing pressure to deliver as Black Friday approaches